skip to main | skip to sidebar

Our Last Supper… In Greece 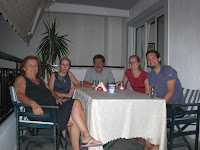 Our last few days in Greece we’re a little slower pace than how we began out time here. Maybe we should be better about pacing ourselves as we travel, but we wouldn’t change anything about our experiences here. The benefit of finishing things this way though is that we have been able to enjoy the company of Merkuris, Sophia and their children: Eva and Anestis. We are deeply indebted to them for putting us up during our time in Athens and for taking such great care of us. We wouldn’t have been able to experience as much as we did if it had not been for their wise counsel. A big “THANK YOU” for all your help from navigating the metro to teaching us home to make some authentic Greek dishes. 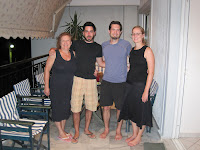 On Wednesday(July 15th) evening Sophia (with Merk’s help) demonstrated their culinary skill and prepared us the Greek interpretation of Chinese food for dinner. Of course, it was very good and Eva was able to join us for the evening as well. It was nice to connect with her and get the perspective of someone from the younger generation. During our time here we’ve become more accustomed to eating dinner at 9 or 10 pm and then sitting on the patio talking until 1 am or so.
On Thursday night (our last evening in Athens) Merkuris and Sophia took us to the center of the city for dinner. It was a great treat and we enjoyed some traditional dishes as well as a big mixed plated of meat (lamb, sausage, seasoned hamburger called “beef steak” and a few others). We returned “home” and had a pastry type dessert (kind of like baklava but filled with fresh cream) and enjoyed some time talking with Anestis.
We both felt like our time In Greece has ended much too quickly but as we look towards home in the next couple days we are excited to re-connect with friends and family. We’ve learned a lot about Greek culture and are excited to try our hand at preparing some of Sophia’s culinary delights in the months ahead.
Posted by The Schneids at 11:32 PM No comments:

Keith and I are feeling the effects of travelling. In other words we are tired. So, we decided to blog about our time in Meteora with a poem; a haiku to be precise. Here it goes and please forgive us if we mess up the form:

Ow, those thorns do hurt!
Watch out on the road
Buses take the corners wide
Faster than the trails

Climbing rocks with guide
Keith and Laura in the air
Enjoying the view
.
Enjoy the pictures. 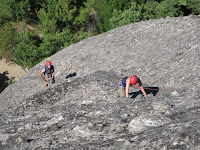 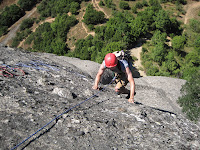 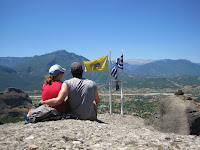 Posted by The Schneids at 7:36 AM No comments: 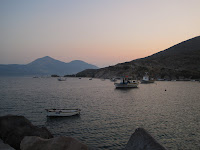 We can’t say enough good things about this island. We spent four nights in Adamas (the main port of Milos) at the Hotel Eleni (http://www.hotel-eleni.com/). Our hostess, Eleni, offered us a great deal for a room at 30 Euros per night, but warned us it was a 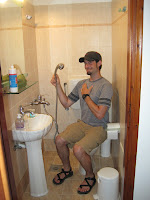 little small. We decided to make it work and enjoyed the added bonus of being able to shower while sitting on the toilet. Just kidding, but we could have. Despite the close quarters we had a great stay. Our hostess was very accommodating and went above and beyond to make sure we were comfortable. When we asked for coffee in the morning she generously added pastries free of charge. 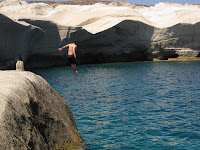 There were plenty of things to keep us busy on Milos, which is said to have the most beaches of any Cycladic island. We realized quickly that we’re not very good at just sitting on a beach and tanning. However, we were able to find plenty of beautiful places to swim and play along the coast. It was great to be in the crystal clear water and swim around some awesome cliffs and rock formations. 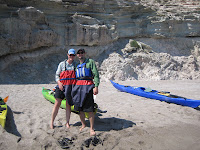 On Wednesday we were fortunate to book an all day sea kayaking trip along the south coast of the island. We had a great time with our guide Rod (native Australian), another couple from Canada and a family from the UK. It was nice to see the coast line up-close and also enjoy some more secluded spots on the island. The beach where we had lunch was beautiful and we had it all to ourselves. 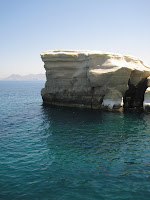 In the evenings we enjoyed a simple dinner of Greek gyros from what became our favorite souvlaki grill followed by homemade ice cream. It was so good, especially with the 95 degree heat we had the last couple days on the island. It definitely was one of our favorite spots and we would not hesitate to come back. Now it is back to the mainland for more adventures and time with family. 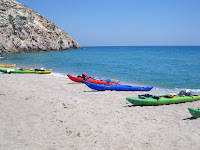 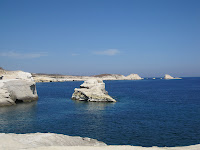 After leaving Crete we headed for the island of Santorini, famous for its caldera, sunset views and crowds of people. We were fortunate and arrived before the rush; high season in Greece is July 15th to August 15th. We did have to do some jockeying to find a good view for the sunsets when people tend to mass in the towns of Oia and Fira. Fortunately, Laura found us a “short cut” around the masses to our own private hill side. We may have trespassed a little, but who can tell. 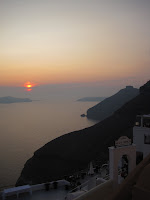 During our stay we had to arrange for some transportation around the island. We know most people think of scooters for getting around quickly in Europe, however, Greece has also adopted the Quad as an acceptable form of transit. ATVs drive right alongside cars so it was an obvious choice (plus they require a special license to even rent a scooter). It was great to have the freedom to go where (and when) we wanted to on the island and had a wonderful time exploring on our gutless wonder of an ATV (topping out at 60 KPH on the downhill).

Other highlights of our Santorini experience included: 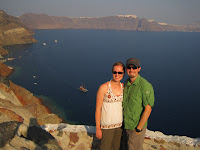 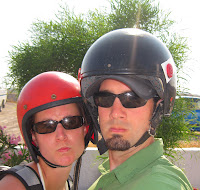 From the south coast we headed to the 3rd largest city on Crete, Rethymno. It reminded us a little bit of Hania (Venetian influence and harbor) but it didn’t capture our interest in the same way. I think we were a little tired from the bus travel over the course of the day.

We stayed at a cozy little place in the center of town called Pension Olga. It had some pretty funky décor that gave it an interesting

ambiance. Stella and her husband George run the pension and the adjoining café that served up our breakfast the next morning. It was a great meal and we were so thankful for free refills on coffee!

We were only in Rethymno for one night and part of the next day. Stella directed us to the open air market adjacent to the beach by the harbor. It was a bustling Thursday morning and we were surprised to see a variety of fresh fruit, seafood and rabbits for sale. We took advantage of getting some apricots and mandarins (which were so good) but passed on the live animals.

On a whim, we decided to take a bus up into the mountains to visit a traditional Cretan village called Anogia. Our bus left around 2 pm and we were definitely the only tourist types on it. We weren’t sure what we were getting in for but felt confident the bus ride would at least be an adventure. At one point the driver apparently almost left some one behind, but fortunately the elderly lady on the side of the road could yell loud enough to stop a herd of goats. She and the driver got into a verbal

shouting match for a bit and the other passengers seemed to be voicing their own opinions as well. Another moment when we would like to have known more Greek.

We arrived at Anogia without further incident, enjoyed the view of the surrounding area, had a quick lunch/dinner and then caught a bus for Iraklio, the largest city in Crete. That evening we enjoyed walking down the sea wall as the sun set over the busy city. Just another day in Crete.

Posted by The Schneids at 11:40 AM No comments:

Another early morning. Traveling is fun, but after awhile you start to get a little tired of waking up before dawn and packing your bag. However, we were planning on hiking a few miles (~10) through the Samaria Gorge (http://en.wikipedia.org/wiki/Samaria_Gorge) and wanted to get an early start before the day got too hot.
The bus ride from Hania up into the mountains was just a precursor of the adventures that lay in store for us. You see,

the roads on Crete are pretty much carved into the hills and switch back all the way up. Now, imagine you are in a big charter bus taking hair pin corners with a steep cliffs, oncoming traffic and goats running in the road. It a little exhilarating!

We arrived at the trailhead before 8 am and got hiking. We weren’t sure what to expect and frankly were a little surprised that the first 6 kilometers were down hill. And we’re not talking just a little down… It was like someone slapped a mountain goat (or in our case, a wild Kri Kri - see http://en.wikipedia.org/wiki/Kri_kri) on the butt and followed it down the mountain. Our legs were shaking after the first couple kilometers, especially since we decided to carry our backpacks with us.
All in all it was a great hike through the gorge filled with pine trees, an old village (like BC old), a small river and some pretty dramatic scenery. We were both glad for the opportunity to be out and active in God’s creation.
After about 5 hours of trekking we made it to the coast and the village of Agia Roumeli. The beach was a little crowded from all the people trekking the gorge, but after 5:30 when the last ferry leaves we had the place to ourselves. The village was very peaceful and we couldn’t get over how clear and blue the sea was. We definitely enjoyed our stay there.
The next morning we were able to take it a little slower before catching our ferry out. Along the way we were impressed by some of the villages along the rocky shore. We would have been happy staying at any of them a little longer.

Posted by The Schneids at 7:33 AM No comments:

Last Sunday night we hopped on an overnight ferry from Athens to Crete. Let’s just say our accommodations weren’t like the love boat and it was a long night trying to sleep upright in a chair. At least we had plenty of company on the ship.

and were unexpectedly blessed with an amazing sunrise over the old harbor as the city woke up around us. By the time we got to our hotel (http://www.mmebassia.gr/index.html) around 10 am we both crashed hard. Having a nice bed to crawl into was like a little piece of heaven after a night on the ferry.

In the afternoon we wandered around the city, enjoyed the Venetian buildings and relaxed on the beach. The evening brought with it some

additional treats: an amazing sunset over the sea and our first Greek gyros for dinner. We really enjoyed the feel of the city and its quaint charm.

Posted by The Schneids at 7:28 AM No comments: